Login to your dashboard

This will forward you to our secure login page. Please check if the address is https://manager.stampwallet.io.

Go to your dashboard now!

In racing it’s a combination of loyalty for a brand and a relationship:

A lot of loyalty if you ask us! So who is Colin Caresani, and why do we see him as one of the greatest talents on the podium? 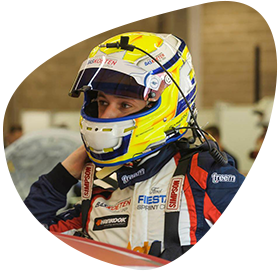 Colin is only 16 years old and is racing the Ford Fiesta Benelux Cup. It is his second official year in motorsport. He finished his first year (only 15 years old!) 1st as Rookie of Benelux (Belgium, Luxembourg and Netherlands), 2nd junior of Benelux and 3rd overal of Benelux!

His ultimate dream is to become a professional GT3 driver.

Colin started his career in karting at the age of 9. He practiced a lot in Lelystad in the Netherlands.

In 2015 Colin advanced to the Dutch Championship karting – Rotax Mini Max. The competition was of a very high level.

Colin: “a lot of the drivers that finished in the top 10 there are now racing Formula 3, or 4”. His best result was a 9th place finish in Kerpen.

The next year Colin continued his early career in the Rotax Junior Max and competed in the Dutch and Belgium championship. It was a hard year with a lot of new learnings. In the end of the season Colin finished 4th and he was race leader in a couple of races.

In 2017 Colin was also driving the dutch championship competing in the top of the field, together with drivers he used to look up to in the previous years. He earned his place in the drivers field at a very young age.

Colin ended his karting career in 2018 finishing 3rd in the Dutch Championship and 5th in Europe.

2019 was a very important year for Colin. Empowered by the well known team of BasKoeten Racing and selected for the KNAF National Academy Talent program. This was also the year Stampwallet and Puntje became proud sponsor.

His first motorsport race resulted in a 2nd place on Zolder in the Ford Fiesta Sprint Cup, don’t forget Colin is only 15 years old at that time: a star has born! Finishing as 1st as Rookie of the Benelux, 2nd Junior of the Benelux and 3rd overall Benelux!

We are proud sponsor of Colin, we hope our loyalty towards each other will last a lifetime!